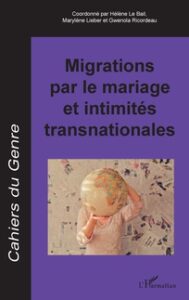 This literature review article examines migrations caused by exogamous transnational marriages, the rise in which coincides with the globalisation of the marriage market from the 1980s, and which are characterised by a strong overrepresentation of migrant women. The article focuses on studies that integrate this phenomenon into a wider analysis of the globalisation of reproductive work and of the bio-political control of female migrants. It reveals how studies that describe these migrations as a source of a much-needed workforce, and those that analyse how migrated wives are targeted by discourse presenting them as an idea of threat complement each other.

Based on a study of migrated wives who arrived in the country through marriage and live with their Japanese husband, not in big Japanese cities but in farming or fishing villages, this article shows how the structural problems of Japanese society with regard to gender norms contribute to making foreign women more vulnerable due to the absence of any migration policy. It also reveals that the many studies exploring the strategies developed by foreign wives to gain recognition have indeed improved the image of female marriage migrants, but have also had the effect of downplaying the fact that these migrant wives must deal with structural gender inequalities.

This article examines the processual lived experience of family reunification in Canada from the perspective of Canadian women in binational relationships. It explores how the administrative difficulties that these women face, especially regarding the questioned authenticity of their marriage, brings about strategies of resistance, but also (re)produces the idea of conjugal authenticity. The semantic construction of authenticity allows for these women to legitimise their non-normative spouse selection.

In post-Soviet countries, international dating agencies have flourished, in particular since the revolution sparked by new communications technology. Through an ethnographic study of such agencies located in Russia, in Ukraine and in Belorussia, this contribution analyses their practices and shows that these institutions are not hermetically sealed-off from gender regimes. The typology offered here allows us for a distinction between agencies that promote such regimes (conservative agencies), oppose them (subversive agencies) or accommodate them (allied agencies), while their clients use all of these agencies indiscriminately, thus multiplying their chances of pursuing various objectives (migrating, getting married, travelling, improving their financial situation, etc.).

Elena Barabantseva and Caroline Grillot — The Status of ‘Family Visitors’: Myth and Reality of Russian and Vietnamese Wives in China

For the last two decades international marriages have been growing across China’s major cities, rural areas and borderlands. In this article, we examine public representations and experiences of marriage migrants from Russia and Vietnam in the context of a demographic shortage of marriageable women in the PRC. Both Chinese media and Chinese immigration regulations promote traditional family roles for migrant women. Migrant and undocumented statuses of foreign spouses in our examples tie them prominently to family caring responsibilities. This precludes migrant women from legal working rights or entrepreneurial activities, and leaves them in the precarious position of a temporary ‘visitor’ in their own family. Furthermore, we show how the realities of international married life in China interfere with personal agendas and how the women negotiate their unforeseen new statuses in Chinese society.

Felicity Amaya Schaeffer — Cybermarriages in Mexico and Colombia: From the Erotics of Nationalism to the Modulations of a Citizenship across Borders

Over 200 international marriage broker websites, advertising romance and marriage between U.S. men and Latin American women. Yet, despite the fact that international marriage sites advertise all Latin American countries as breeding women who are naturally more feminine, beautiful and family-oriented than U.S. women, this article explores the reasons women from Guadalajara, Mexico and Cali, Colombia express distinct reasons for marrying U.S. men. Part of this difference, the essay argues, tells us how women’s class status alters their relation to their particular national imaginary.

Nadia Mounchit — Joining One’s Other Half and Finding Oneself in the Process. Sub-Saharan African Women ‘Regrouped’ in France After Migration

Based on a survey carried out in Villeurbanne among women from West and Central Africa who had come to France as part of a family reunification programme, this article aims to go beyond the fixed figure of the so-called ‘regrouped’ (Oso 2000) women’s immigrant, which has largely been the lens through which female migrations have been analysed. After their arrival in France, which is characterised by multiple dependencies (interruption of professional life, loss of financial autonomy and isolation, sometimes even incurring the ‘debt of the follower’) that affect their social status and their position within their relationship, these emigrants start to (re)acquire autonomy, in particular through professional activity, in order to lose their status of migrants and, even more so, of migrants under family reunification laws.

Camille Gourdeau — What do we mean exactly by ‘Welcome’? The ‘Jobs’ Section of the Welcome and Integration Contract and the Segmentation of the Labour Market

Numerous studies have investigated racist, classist and sexist divisions in the labour market, both on a global and national level. The aim of this article is to examine the way in which integration policy relates to this process, by focussing more particularly on the ‘Jobs’ section of the French Welcome and Integration Contract (CAI: Contrat d’accueil et d’intégration). According to the French Office of Immigration and Integration (OFII – Office français de l’immigration et de l’intégration), which manages this programme, the professional skills assessment works to support participants’ entry into the labour market allowing them to quickly get a job. However, direct observations made during profes­sional skills assessments show that the practices of OFII agents and its service providers contribute to directing immigrants, in particular women, towards insecure, low-qualified jobs and socially undervalued sectors of activity.

Elisa Pelizzari — Civil War and the Question of Gender in Somalia. Events and their Consequences on a Woman’s Destiny: Starlin Abdi Arush (1957-2002)

The vicissitudes of Starlin Abdi Arush (1957-2002) reflect the contemporary history of a country, Somalia, that has been shaken by civil war since 1991, and is the victim of a ‘clan-based’ conflict, encouraged by war lords but also, more recently, by the rise of religious radicalism (Cosic and the al-shabaab terrorist movement). The ideal put forward by Starlin, who viewed women as a kind of ‘sixth clan’ in Somali society, is now a cultural notion shared by numerous activists, as demonstrated by the work of the Somali Women Agenda, which was created in 2007. This organisation, which brings together women living in Somalia and women of the diaspora, is acquiring significant weight in the political arena, in terms of women’s participation in peace projects and, even, in conquering power.