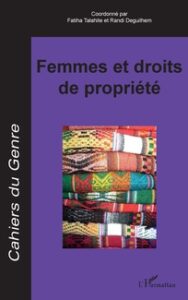 Fatiha Talahite — Towards a Gendered Political Economy of Property Rights

This article explores the historical roots of gendered unequal access to property in the two European legal systems, Common Law and the so-called continental codes (civil law), which have become hegemonic through colonial expansion, the postcolonial state and globalisation. The generalisation of the Western model of private property, a process partly supported by the application of the United Nations Convention on the Elimination of All Forms of Discrimination Against Women, has led to an exacerbation of gender inequalities, while simultaneously destroying the diversity of legal systems. Should we be reinforcing the individual property rights of women, or promoting a return to ‘customary’ legal systems? The new theory of the commons could allow us to move beyond this dilemma.

Sibylle Gollac — The Hidden Gender of Property in Contemporary France

An analysis of the problems encountered in performing a statistical analysis of wealth inequalities between men and women reveals the gendered nature of property rights in France: the sources on which such an analysis must be based record the wealth of households or of fiscal households and not of individuals (men or women), and collective forms legal of property also do not distinguish between men and women. As it turns out, having reconstituted individual asset holdings, the wealth of women proves lower than that of men. Furthermore, we observe that women do not hold the same rights over wealth as men: they are more often the owners of assets over which they have no management rights. Finally, in situations where their property rights are formally equal, their position within the power dynamics between owners of a same asset limits their power over such assets.

Frédéric Mertens de Wilmars — The Exclusion of Women from a Community of Spanish Fishermen. “He who has a son has property, he who has daughters has nothing”

To the south of Valencia (Spain), in the middle of Lake Albufera, an island has been inhabited for eight centuries by fishermen who make up the community of the El Palmar fishermen. This community is characterised by its customary rules excluding women from having access to the fishing rights known as the redoli. Though this is presented as a work-based gender discrimination, it is in reality more of a discrimination that takes the form of a privatisation of the rights connected to the property of a legal asset. Five women, all of them fishermen’s daughters, have called into question these centuries-old patriarchal rules before courts which, in turn, have called upon international law to justify their rulings.

Katerina Melissinou — Standardisation and Misfortunes of the Dowry (Prika) in Greece

This article explores the different gender ideologies behind two dowry systems in Greece. The distinction between Continental Greece and Aegean Greece according to the rights of men and women to property illustrates the impact that the unification of their legal systems in the second half of the twentieth century has had on local legal traditions, which tended to favour women. This unification in the Civil Code since the 1950s, when the institution of the dowry was applied homogeneously across the entire Greek territory, has largely obscured the different meanings of the term ‘dowry’ as it was understood in customary law, and the meaning it is given in the Greek Civil Code.

Yasmine Berriane and Karen Rignall — The Construction of Custom in Morocco: Women’s Rights to Collective Land

This article locates current debates concerning the gendered access to collective land in Morocco within the context of a wider discussion about colonial legacy and the construction of customary law. The colonial construction of the ‘ethnic community’ and the institutionalisation of ‘customary law’ have preserved custom as a legal category, but they have rigidified its application by integrating it to the framework of positive law. The way in which customary law and positive law mutually shape each other has produced a state-sanctioned system of structural exclusion of women from collective land. Today, various actors are challenging this system of exclusion. To do so they bring back to life colonial legal categories by using ‘custom’ to new ends and by reproducing the distinction between customary regimes that oppress women and a positive law that promotes equality. In this context, the importance of the colonial legacy is often simplified, or even at times forgotten.

In the Bamiléké Country, women are responsible for food production. Along with motherhood, working the land is a major social role for women. In order to allow them to perform this role, the traditional land regime, which was created in an environment of dense population and intensive farming, guaranteed women access to land through usage and farming rights. Modern land legislation has offered them ways of accessing landownership, which constitutes an advance compared to the customary system. However, the effectiveness of this law remains problematic for female farmers, who must overcome numerous obstacles, both social and economic.

This article examines narratives of illegal abortion in New York in the 1950s and 1960s, through the autobiographical writings of two female artists: the memoirs of Diane di Prima, Recollections of My Life as a Woman (2001) and Audre Lorde’s “biomythography”, Zami: A New Spelling of My Name (1982). By examining these tales of abortion in all their singularity, we will show how these texts, which oscillate between self-construction and self-reinvention, turn this experience into a pivotal episode in the process of political and artistic subjectification. Such an approach opens up analyses of a life experience that is usually left untold.

Solène Froidevaux — Interactions with Materiality. The Production of Gender in a Tram

Gender is expressed in daily life through interactions which may seem anecdotal, like that of taking a tram and coming across other passengers, both male and female. The ethnographic observation of the public space has been developed in the interactionist perspective, and yet the role played by objects in the structuring of action and the way in which they participate in the production of a gendered scenography of space has not been explored so far. While materialist feminists have taken an interest in material conditions, and more precisely in material relationships leading to asymmetrical relationships between women and men, their structuralist perspective has however partially obscured the issue of interactional dynamics. This article sets itself the task of examining this material dimension of gendered interactions based on observations made in public transport, and, through this, of showing the contribution that can be made when observing closely objects and the ‘physicality’ of space in order to understand and analyse the gendered interactions of daily life.

Chantal Morley and Isabelle Collet — Women and IT Jobs: a World for Them Too

Information Technology is playing an increasingly important role in how our societies develop, but women have been largely under-represented in jobs in this field for several decades. This phenomenon has been analysed by feminist researchers as being the result of processes of exclusion or self-exclusion. However, some universities have succeeded in achieving sustainable rates of near-equal representation in IT studies. The aim of this article is to analyze these actions with the concept of social inclusion, and to elaborate a framework that might allow us to think about the inclusion of women in the professional IT world as constituting a change in culture and practices.

Quentin Ravelli — Men and Women at Work and New Inequalities: The Case of the Pharmaceutical Industry

The presence of men and women at work is often perceived as guaranteeing equality, but can in fact generate new inequalities that are more persistent because they are less easy to detect. For a long time, in pharmaceutical industry factories, women were exclusively responsible for putting the pills into their boxes. As these manufacturing processes became automated, this job of the ‘packer’ disappeared, giving way to that of ‘plant controllers’, employees who often hold a vocational diploma. In this context, ‘technical couples’ are formed in some factories, resulting in a division of labour in which the women find themselves at the end of the production line, carrying out the most manual tasks. Statistically, factories are moving towards parity, but in fact produce a new unequal division of labour.