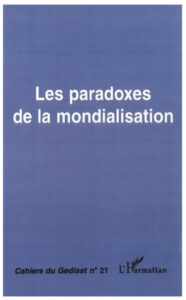 Helena Hirata and Hélène Le Doaré — The paradoxes of globalization

This article first shows, in its introduction for this issue, how taking into account of the social relations of sex/gender opens two avenues for analysis: 1) a questioning and a critical deconstruction of the concept of globalization (“mondialisation”) ; 2) an attempt to reflect upon the current context surrounding what is labelled as globalization, and what this signifies for the work and employment of women, for their social movements, and even for… feminist thought today. It then presents two separate texts, each with a different focus, demonstrating the spirit within which this issue was conceived — the integration of divergent viewpoints. The first covers the radical transformations of work and employment (H. Hirata) and the second deals with social movements (H. Le Doaré ).

Fatiha Talahite — The employment of women in the Maghreb, from structural adjustment to post-adjustment

In the Maghreb, structural adjustments, while producing some negative effects, have revealed the existence of a female work-force ready to enter the labour market if only there were some expression of the need. This seems to converge with the Euro-Mediterranean project which aims at specializing the South in industries that are not profitable, using the plentiful and cheap workforce. However, the existence of higher and varied qualifications, the opportunities for enlarging the local and regional markets could open up other perspectives for the employment of women. This would occur if the political and institutional domain were to expand, permitting the dynamics of these societies to express themselves, with the emergence of new generations of working women constituting an essential component. But world and Euro-Mediterranean integration, as it currently presents itself, still essentially tends to be no more than a brutal movement of devaluation and exclusion.

This article describes the ambivalent meeting between women and information technologies within developing countries: If the creation of new jobs is beneficial to them, this is accomplished at the cost of the emergence and accelerated development of repetitive stress injuries. In presenting the terms of the debate for the Northern countries, the author’s analysis is placed into a comparative perspective.

This article analyses the current role of agriculture in the Latin-American countries within the new international order and the process of restructuring of production which is being put into place, especially within the agricultural export sector, where new forms of production and work are being deployed. The analysis applies to the whole Latin-American continent but is focused particularly on one Mexican example: the floriculture industry.

Jeanne Bisilliat — The rationale for a neglect: Rural African women and the Policies of Structural Adjustment

After an overall presentation of the consequences of the Policies of Structural Adjustment upon gender relations, specifically concerning rural African women, the author attempts to show the mechanisms operating within the organization of the World Bank, and also the European Union, which facilitate the neglecting of gender relations within macro-economic policies.

Catherine Quiminal — The associations of African women in France: New forms of solidarity and individualization

The migrations of African women to France are linked in part to global economic constraints and are accompanied by the determination to take advantage of the radical changes that have occurred. This article studies the role of the associations of African women in their increasing awareness that, while already the object of numerous discriminations, their group membership permits them to claim, and to realize, a change of status at both the social and family levels. At the heart of the contradictions induced by globalization, these associations are generators of social bonds. They provide the place where new forms of citizenship are elaborated, a contemporary citizenship of the “national multicultural states” which would respect the equality of individuals and their necessary differentiation.

The Latin-American and Caribbean feminist movement has developed considerably since the 1970s. One of the noticeable elements in this evolution is the growing institutionalization: consciousness-raising groups tenaciously autonomous in the beginning have now often become important NGOs. This development brings with it positive aspects, notably a larger visibility and legitimacy for the claims of women. At the same time, it poses problems within the groups and the women’s movement: Is this the best strategy? Who decides, and how, the movement’s strategies? Is the feminism represented by the NGOs still subversive?

Philippe Zarifian — Toward a “World People”?

The author wishes to show that globalization and economic world-wide expansion, far from promoting a world-wide development, only induces local and precarious effects, dominated by the instantaneity of the placements of capital in the financial markets. Dynamic exchange networks are forming throughout the Globe, but these only sketch a large skeleton associated with the growth of human deserts. As a counterpart, however, the World also constitutes itself by the bonds woven by different peoples, by their physical mixing and by the shared beckonings of the major media. Thus, within the hidden folds of capitalism, there may perhaps be rising a new “World People”, the outline for a genuine humanity.